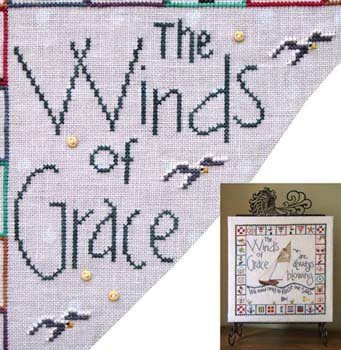 Winds of Grace is stitched on Fabric Flair 32 count French Polka Dot linen using two strands of Weeks Dye Works over-dyed floss in Aztec Red, Battleship, Blue Heron, Blue Jeans, Chestnut, Chesapeake, Chickpea, Cornsilk (2 skeins,) Dirt Road, Fathom, Grits (2 skeins,) Guacamole, Hibiscus, Purple Haze, Sally's Sunshine, Sea Glass, and Squash. Many full skeins are used, so I would begin this project with new floss. Two of the colors used, Chickpea and Fathom, were introduced at the TNNA St. Charles Market at the end of August. Embellishments are from our collection of colorful over-dyed buttons and this second pack is tiny compared to the first HERE. When completed, and while in progress, Winds of Grace is displayed on an Ackfeld 12" x 14" table stand HERE, with an Old Man Wind header HERE.

Named for the bells on a ship that signal the progress of a four hour watch, Two Bells, the second book in the series, contains the chart for the upper left of the central design.